A downloadable game for Windows and Linux

Welcome to @*TERM!  This terminal program is pre-configured to connect to the Tower of Babel servers where you can play roguelikes from all alternate universes!

Like all roguelike games, each game uses all the letters of the keyboard for commands.  However, as only the lowercase a-z keys are compatible among all parallel world character encodings, they are the only that will work.  Further, the mapping of each key depends on the standards set in the universe you connected to...

@*TERM includes the ability to remap keys using F1.  When you learn the meaning of a key you can map it to mnemomics that make sense in your reality.

The official page may be found at: http://www.zincland.com/7drl/babel

Windows: Unzip, and run the babel.exe from the window subdirectory.

Linux: Unzip, and run babel.sh from the linux subdirectory.

FYI "carotid artery" is misspelled as "cartoid artery." Too bad there is a spell of death... that makes the discovery of the controls even more of a total gamble...

Thank you for catching that!  I sent the text.txt through  a spell checker, but that flavour text was inlined in the C++ so escaped detection!

The spell of death works more like the Angband Potion of Death; so it does not make it a complete gamble.

This is insane and awesome. :) The start of every game is just a scramble to learn how to move before the monsters get you. The inventory management is interesting and actually quite tactical and fun, with you having to think about which item should be left up on top. The spells are an icing on a cake. :D

The commands to break your weapon and open your artery are just evil. :D I'm really surprised you didn't include commands to rotate the view, as that would confuse the heck out of players.

I would also really like if number keys could be included in possible keybindings, because that would make re-binding some commands easier to manage. Even if it would mean more obscure commands to fill all the numbers.

Overall, as great game as ever, as original as ever. I will have to play it more to actually survive more than just three or four floors. 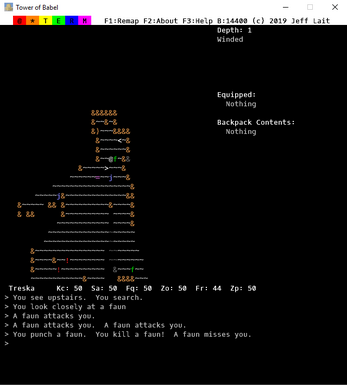